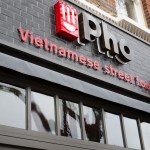 Goodbye Cafe Rouge! (I won’t miss you personally…) and hello Byron! It’s still a chain, but it’s definitely a step-up, and frankly they serve craft beers which is more than most pubs in Chiswick!

It’s fair to say that Union Jacks had many admirers and many dissenters. Although I was in the former camp, we obviously didn’t number enough, as their doors closed last month.

In its place will open Jackson & Rye, a “sexy NYC style brunch spot” and restaurant. After having heard a great amount of excitable buzz on Twitter I then read a few scathing reviews like this from the Guardian. Let’s say I shall reserve judgement until they open, then I’ll give you the Chiswickish Verdict!

Finally Pho, which opened this weekend (8th March 2014). A chain restaurant serving decent Vietnamese street cuisine. Brave enough to take the more “sleepy” end of the High Road in place of the old Chiswick Cafe (and former very-well-known-local-spot Adamou greengrocer), I’m certainly pretty happy to see them as it’s near my place. Check out my review of Pho on this site…